Though carved on a quiet hillside by an eccentric sculptor in the 1950s, a curious rock face near Ripley, West Virginia, is attracting a larger audience than ever, thanks to the Internet. More travelers than ever are on the hunt for the rock.

West Virginia's own little Mount Rushmore, the folk-art profile is gaining popularity as a cultural landmark, according to Mike Ruben, executive director of the Ripley Convention and Visitors Bureau.

"It definitely gets a lot of attention," Ruben says. "If you post a photo of it and include just a few words in the description, it's going to get social media shares."

Carved by the late Otis Shinn, the image was intended as a memorial to founding father George Washington, though it might bear more resemblance to a brooding Easter Island monument.

Ruben said that the profile worked in a sandstone cliff is some six-feet tall and has been painted silver at times to increase its visibility.

Though it can be spotted by keen-eyed motorists traveling Interstate 77, foliage obscures the face much of the year, and the best way to observe the landmark is along Parchment Creek Road, which parallels the interstate north of its Fairplain exit (exit 132).

The face is located on a wooded hillside on Parchment Creek Road approximately 1.2 miles northwest of its junction with the Charleston Road, Jackson County Route 21.

Shinn died in 1962 at age 61, so the face was certainly carved in the 1950s at the latest, though no date has been recorded for the work.

The sculptor also wrought several statues, including that of a lion and of Thomas Jefferson, which were later sold through an antiques dealer, according to local lore.

Ruben says that the face and the wooded hillside around it had at one time been maintained as a beauty spot by the Parchment Valley Homemakers Club but that the site is no longer maintained.

"Why'd he carve those rock heads, I don't know," Shinn said. "His mind ran that way, and he carved. He never gave any explanation of them that I know of. He just carved them, and that was that."

Shinn grew up in the region at the head of Parchment Valley where his father was a farmer and owned a 1,200-acre farm, according to the Daily Mail article.

Ruben said that former Ripley antique dealer Rachel Tillinghast has purchased a woodcarving from Sam Kessel, a childhood friend of Shinn's who claimed to have worked as Shinn's assistant on the rock face.

Shinn was reportedly a foreman on local bridge projects and a road crew supervisor for Jackson County. He died at Staats Hospital in Charleston and is buried at the Fairplain Cemetery.

For more information on the rock face and other local attractions, contact the Ripley Convention and Visitors Bureau. 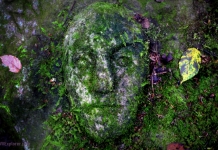