Longing for a life far from city lights? You could hardly do better than to move to West Virginia. A paradise of star-spangled skies awaits at the center of the eastern U.S.—a drive of less than an hour from Pittsburgh and Washington, D.C.

High in the mountains, its air is clean, and its population relatively sparse. As a result, it boasts extremely low light pollution, though it's ironically located near the center of the eastern U.S., which is one of the most lighted regions in the world.

The night sky in some parts of West Virginia is in fact so star-spangled that it may seem pre-industrial, says astronomer David Buhrman, who often tours the region with telescopes, leading educational programs and advocating for the value of starlight.

"If you want to know what the night looked like in the good ol' days, come to West Virginia where the sky can grow brilliant with stars.

"It's something most Americans have only read about in books."

No other region south of the Adirondacks of upstate New York is so free of artificial light, Buhrman said, and three of the very darkest reaches in the east are located within a drive of an hour of two of his observation area in the Alleghenies of eastern West Virginia.

David Sibray, the publisher of West Virginia Explorer Magazine and a real estate agent who specializes in the sale of rural real estate, says dark skies have real appeal for expatriates of urban America.

"Many customers who buy farms and mountain getaways here have been living in cities like D.C. and have a real interest in getting back to the basics. They're looking for a simpler existence, and part of that is being able to walk into the back yard and look up at the stars."

In addition to their ability to inspire awe, the dark skies above West Virginia may provide health and quality-of-life benefits, such as aid in stabilizing circadian rhythms. Astronomer Burhman suggests that communities that value night-time darkness might encourage developers to employ modern, efficient lighting design.

"Simply putting reflective shields above lights will dramatically improve their efficiency, saving electricity and money while helping to preserve the glorious night sky.”

In addition to traveling to events, Buhrman operates an observation area, a "dark site," in northern Greenbrier County -- a drive of about 35 minutes north of Lewisburg.  Readers can find out more about Buhrman and West Virginia Sky Tours and its programming at WVSkyTours.com.

A guide to best practices for maintaining dark skies is available through the International Dark-Sky Association at darksky.org.

Where are the darkest night skies in West Virginia?

Based on Google Map-based dark-sky data, the largest areas of dark skies in West Virginia occur where populations are lowest or are least concentrated and where mountain walls shut out light from cities and light sources such as surface mines and gas wells.

Thus the largest dark sky-areas occur over the hills of northwestern West Virginia and the Allegheny Mountains of the southern, eastern, and northeastern state. The very darkest reaches of night sky open over its highest and most remote mountain regions.

In the north-western state, a large area of dark sky is located over Calhoun County, at its center, in the valley of the Little Kanawha River. It includes large parts of Clay, Wirt, Roane, Ritchie, Gilmer, Lewis, and Braxton counties. Two very dark areas within that region are located in remote areas in southern Ritchie County between Auburn and Smithville and in the forests north of Rosedale in southern Gilmer County.

Other notable dark areas in the northeastern state are to be found among the remote ridgetops in Tyler, Wetzel, and Doddridge counties.

The state's most brilliant night skies arc across the Allegheny Mountains of the eastern state. Remote mountain peaks and vast national forest areas here sink into darkness otherwise known only over the vast Atlantic Ocean. No artificial light is produced across much of the area, particularly over vast wilderness areas in the Monongahela and Washington & Jefferson national forests.

The very darkest skies in the whole of the state open over remote mountain areas within this large region. The largest of these deep dark areas is located in the Yew Mountains north of Cranberry Glades. Another is located above Allegheny Mountain on the Virginia border northeast of Frost. Another opens over the high Alleghenies north of Monterrey, Va., and south of Circleville and Spruce Knob, the highest point in West Virginia. 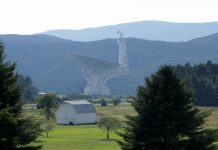 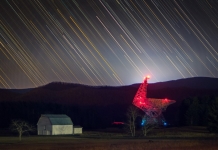 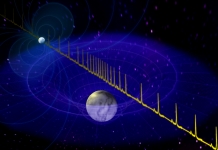