An enigmatic stone face carved into mossy sandstone along the rim of the New River Gorge is attracting increased attention as tourism grows in the new New River Gorge National Park and Preserve.

Though its origins are popularly regarded as a mystery, the bas-relief countenance was likely carved in the 1950s, and the son of its creator may still live in the area near Fayetteville, West Virginia, according to locals who still regard it with a sense of awe.

"I think of it as a kind of benevolent spirit of the forest," says Gene Kistler, who first encountered it in the 1980s when he began climbing the cliffs nearby.

"In many senses, it's perfect. It's like the Mona Lisa: You can't tell if it's sad or if it's smiling."

The owners of Waterstone Outdoors, one of the region's destination rock-climbing shops, Gene and Maura Kistler live not far from the stone face and have long regarded it as an important if minor attraction and a noteworthy work of art.

"One night years ago we were driving back from Fayetteville and we hit a screech owl," Kistler recalled.

"I tried to nurse it back, but it died, and I buried it under the little overhang on the left side of the rock. There's a kind of good energy there, and it seemed like the right thing to do."

According to Kistler, the stone face was carved by the father of Leon Johnson, who may still live in the area. The Johnsons lived in a house in the woods beyond the rock on which the face is carved, and the house foundations may still be visible in the ferny understory along the path beyond.

The elder Johnson also carved his surname into a stone that crosses the little run that descends into the gorge there. He also placed bricks and stones along the path, and these can be slippery when wet, so visitors should be sure to watch their footing.

The visage might have been wholly forgotten had it not been carved along the path, which, in the 1980s, became an important trail used by rock climbers accessing what's known as Ambassador Buttress.

Now within of the New River Gorge National Park and Preserve, the old stone face is drawing a larger audience than ever before.

The face is located off Fayette Station Road near the Canyon Rim Visitor Center. For information on how to find it, visit Waterstone Outdoors in Fayetteville, a drive of about four miles from the stone face.

Motorists traveling W.Va. 47 through Ritchie County, in north-central West Virginia, are sure to have noticed the little village of Burnt House and wondered about the remarkable name. Here's the ghost story behind it. 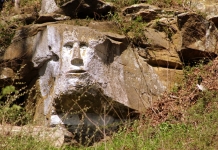