Mountainous and often remote, West Virginia may enjoy more than its fair share of strange stories, but the tale of the woman whose feet never touched the ground is certainly among the strangest.

This remarkable tale comes out of the highlands along the Gauley River in central West Virginia, and though the matter has never been settled, the "Ward Road" to which the anonymous author refers would seem to be that which wanders through the farmlands north of WV-39 between Richwood and Summersville.

We've repeated the story here much as it appears at West Virginia Ghosts, in which it was first published.

"My family who grew up on Ward Road has experienced these series of encounters.

"Growing up, going to my grandmother’s house was an every-evening thing. I would hear my mother and her siblings talk about things they experienced growing up beside the woman whose feet never touched the ground.

"The first story that I heard is one that I will never forget. My uncle is not one who would believe in the supernatural, so hearing the experience from his lips is, I know, factual.

"My grandfather owned many acres that crossed with the woman whose feet never touched the ground, and my uncle would usually cut through her yard coming and going from school. Not believing the stories his sisters told him, he never thought anything would happen to make him change his mind.

"One day the woman decided to grace my uncle with her presence. As he was crossing her landmark, that separated my grandfather’s land and her own, a chill ran up and down his spine. He turned to look over his shoulder to double-check that nothing was behind him, when, sure enough, he finally saw the woman whose feet never touched the ground. He stated that she was 'hovering' across the grass, and behind her stood a table up on one leg, dancing.

"The 'encounters' does not stop there. My mother and her younger sister would also use the woman’s land to cut through to go to a relative’s house. There was a fence that circled the woman’s land, a portion of which was broken down, and that is where my mother and aunt would cross.

"One day they were returning home from visiting my great aunt. As my mother was crossing the broken part of the fence, they heard a cackle, pausing them both in their tracks. As they looked back, once again, the woman whose feet never touched the ground graced them with her presence.

"My aunt then unpaused and hurried my mother across the fence, pushing her out of her way. They both ran home.

"When they finally got home, out of breath, they “babbled,” as my grandfather puts it, about the woman whose feet never touched the ground. From then on out, my mother and aunt found another shortcut to take.

"About a week later, my mother and other sister was walking the main road. There was an old black Chevy truck that would sit in front of the house that was haunted by the woman whose feet never touched the ground. My mother stated that she had a gut feeling that the old woman was near, so she tried to get my aunt to walk up to the truck with her, but she would not. As my mother looked over the backside of the truck, the old woman was laying down in the bed.

"My mother tried calling my aunt to the truck, but when there was no reply, my mother looked over her shoulder to find my aunt already running up the road. She ran after her, and they both went home.

Later that evening my mother went back down the road to see if she could see the woman whose feet never touched the ground. Once again, my mother noticed her in the bed of the truck. This time she was standing. My mother stated that she was standing over a cauldron, stirring, and murmuring something. She could not make anything out of. My mother stated that when the old woman looked at her, she had an awful appearance to her. So awful, she could not describe it.

"Time passed. The old house burnt down in the mid-'90s, and the woman whose feet never touched the ground was never seen again." 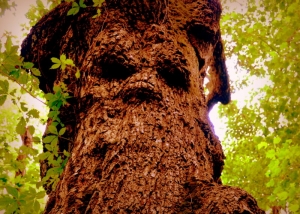 Surely few passersby who have observed the “Witchers Creek” road sign on U.S. 60 have done so without considering the association with the word “witch”—surely a coincidence.

But it turns out that a witch-legend is, in fact, associated with the stream, though few seem to know how believable much of the tale might be and fewer seem to remember the tale, which once made the rounds in Kanawha County. Read the full story.

Tale of historic tragedy haunts the hills of Putnam County