The commercial whitewater-rafting season in the New River Gorge kicked off with high water and high hopes in March, and though water levels have already dropped, officials say expectations for the season ahead remain high.

Despite a sharp decline in water-based tourism following floods in June 2016, tourists are eager to return to the region and get back out on the river.

“There is a lot of interest in tourism in the area this year,” said Tabitha Stover, activity and event manager for the Fayetteville Area Convention and Visitors Bureau. “I have already had an increase in calls with the warmer weather from people who want to come check out the area.”

While Fayetteville and whitewater rafting areas were not physically hit hard by the June 23 flood, the devastation presented on national news networks caused a major hit to local tourism.

“I think this year will be much better for tourism in the area,” Stover said. “The communities that were affected are rebuilding, and I think people realize one of the best ways to help is by visiting our state.”

For rafting companies, it can be tough to predict the season ahead this early in the spring, said Dave Arnold, senior vice president of public relations for Adventures on the Gorge. But, “under hopeful thinking,” he said he expects it to be a very good year.

“Predicting the future is a very dangerous thing. We work with mother nature, so things can turn on a dime — a perfect example was last year,” he said.

However, Arnold doesn’t expect anyone to be dissuaded from returning to Fayetteville this summer, and in preparation for the season ahead, the company opened new lodging units, reinvented one of its restaurants, and added electric-assisted bikes to the many activities the adventure-resort offers.

Skip Heater, owner and operator of New & Gauley River Adventures, also said this year is tracking to be a great year for rafting on the New River.

“Last year, 2016, was one of our best years ever, and from where we were at this same point last year we are way ahead of where we were last year,” Heater said. “So barring any natural disasters, wars or whatever, we are looking to have a really good year.”

Heater attributes the growth of his company to its small, personalized nature and specific focus.

“We specialize in rafting. We have not tried to deviate into the rock climbing, the mountain biking, the zip lining, and be very diversified,” he said. “We do one thing, and we do it very well.”

Several events taking place in West Virginia this summer are expected to draw in even more tourists to the area, Stover said. A three-part Spartan Race and the National Scout Jamboree will both be held at the nearby Summit Bechtel Reserve National Scout Camp.

Adventures on the Gorge has been contracted to take the members of the National Scout Jamboree rafting, and Arnold says he expects to take more than 5,000 scouts down the river during the event. The Spartan Race is expected to draw up to 18,000 people and is sure to provide additional tourism action in the region.

“Everybody feels really good about this year,” Arnold said. “All the stars are lined up.” 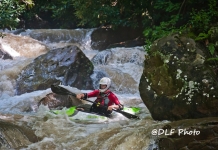 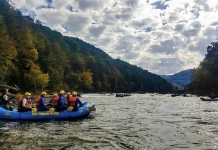 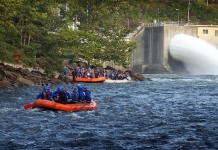