It begins with an errant wind on a balmy day. Leaves on trees turn upward, revealing their silvery undersides, and a rolling cushion of cloud builds in a darkening sky. Suddenly, a jagged light flashes, and rumbling thunder answers. The show begins.

As a storm chaser and photographer, I’m enthralled by lightning! At the hint of a coming storm my heart beats like a drum with the thunder, and my pulse races as I watch the radar.

An hour before the approach, I hunt for a shooting location that provides the most artistic composition possible: lightning deserves to be showcased—surrounded by leafy mountains, dancing across an upland pasture, enveloping a weathered barn. My camera is ready to capture the kaleidoscopic show, and I wait, locked in my own world, mesmerized by the wonder of what will be painted this time.

Electrical storms are among West Virginia’s most captivating weather phenomena. Like a fingerprint, each strike is different, and this lends, I think, to the mystique and uncertainty of each. Though sometimes feared by observers, strikes are among Mother Nature’s most prized beauties.

Lightning occurs in the cell of a thunderstorm when tiny ice crystals suspended in cool air collide with water droplets suspended in warm air. These millions of tiny collisions generate a massive negative static charge. When the charge grows strong enough, it seeks out a positive charge from another cloud or from the ground. When the gap is bridged, a massive discharge occurs, revealed in the cataclysm we call lightning.

Lightning heats the air to temperatures that approach 54,000 Fahrenheit—five times hotter than the surface of the sun. In an instant, the heated air expands then cools and contracts, generating a loud crack! followed by thunder, which booms and rumbles as shock waves travel the turbulent atmosphere. Varied air temperatures fill the painter’s pallet: cool air produces white and blue lighting; hot air, hues of purple.

WSAZ meteorologist Josh Fitzpatrick notes an important storm phenomena that occurs in eastern West Virginia and can influence the incidence of storms there.

“Often times in the summer we get the difference in heating from the valley floor to mountaintop," Fitzpatrick says, "and that causes storms to form along the spine of the mountains of eastern West Virginia. It’s called differential heating.”

If, like me, you enjoy observing or photographing these ominous wonders, I’ve provided the following tips to help ensure your adventures are safe and successful. When tracking a storm, your safety should come first!

The next time you’re treated to such a concert of luminescence, indulge in the awe of its splendor, and celebrate its existence, but do so safely.

Have fun, and please stay safe! 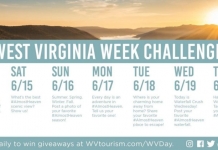 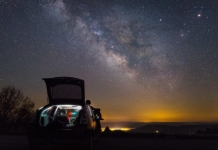 West Virginia by Night: the works of Jesse Thornton

West Virginia by Night: the works of Jesse Thornton