These living-history portrayals by scholars will provide a passage through time for student and adult audiences, according to Paulita Cousin, a naturalist at Blackwater Falls State Park who will help host a program featuring "Teddy Roosevelt" on July 18.

“At Blackwater Falls, like at most state parks, we include a featured activity on weekends," Cousin said. "The opportunity to have figures from United States history adds to the interpretative programs we plan at the park."

The program features scholars from around the state who will portray historical figures at venues including museums, schools, libraries, community centers, and fairs and festivals.

The History Alive! programs are free to attend and open to all park visitors, overnight guests, and the public. 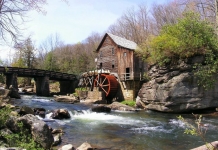