Editor's Note: Despite their economic value, state parks in West Virginia are suffering from a lack of funding. Greg Bray, president of the West Virginia State Parks Foundation is asking for public support of Senate Bill 517, which would channel royalties received from the leases of state-owned gas, oil, and other mineral rights below the Ohio River and its tributaries to a newly created “State Parks and Recreation Endowment Fund."

West Virginia State Parks are a wonderful and important part of our state. They protect irreplaceable natural, scenic, historic, and cultural resources as a legacy for generations to come while providing recreational opportunities to our citizens.

Further, they are among our foremost tourism attractions and, hence, powerful stimulators of the state’s economy. They provide a significant amount of employment opportunity, both in the parks themselves as well as in nearby private businesses that depend upon the tourists they draw.

A 2015 study showed that our park system generates up to $248 million in total annual economic significance—3,209 jobs, $189 million in direct economic impact, and $91.6 million in worker pay. Let’s also not forget the positive image of West Virginia fostered nationally by our park system that helps contradict negative stereotypes at times unfairly assigned to our state.

How fortunate we are to have one of the finest state park systems in the nation. Given the magnitude and age of its infrastructure, our challenge is to keep it operating at a high and productive standard by not allowing its luster and appeal to diminish.

The Governor and Legislature deserve great credit for a current bond issue that is being used to address $60 million of an estimated $100-million backlog of infrastructure repair and replacement needs. In addition, we now have a tremendous opportunity to address the remaining current $40 million dollars in needs while also making sure that such a deficiency never recurs in the future.

I refer to Senate Bill 517 which is now in the Legislature for consideration. Heartfelt thanks to Senators Hamilton, Prezioso, Beach, and Stollings for sponsoring this legislation! Senate Bill 517 assures an additional new and dedicated source of regular funding for our state parks.

Specifically, it would channel royalties received from the leases of state-owned gas, oil, and other mineral rights below the Ohio River and its tributaries to a newly created “State Parks and Recreation Endowment Fund,” which would build up a principal balance under the custodianship of the State Treasurer.

The treasurer would invest fund assets to generate revenues that would be dedicated to maintaining, improving, and preserving the park system and its facilities.

The proposed legislation would create a Board of Trustees made up of the Division of Natural Resources Director and other key DNR fiscal staff—the Parks Chief, the President of the West Virginia State Parks Foundation, two park superintendents, and four citizen members from some of the individual foundations dedicated to the support of specific parks.

If future natural gas production and prices proceed in the hoped-for positive direction, it could well assure that our state park system never falls again into such a bottomless pit of unfunded, overdue infrastructure repairs.

In closing, let us all as individual citizens get behind this superbly positive legislative bill to help assure that our wonderful state park system moves forward with our personal guarantee—a guarantee that its infrastructure will be protected and maintained while assuring the continuation of all the great benefits it provides to our state and citizens.

Call, email, or otherwise contact your legislators right away to let them know that Senate Bill 517 and West Virginia State Parks have your enthusiastic support. 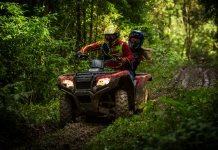