In the market for a new home? The Victorian mansion built on the site of abolitionist John Brown’s 1859 hanging in Charles Town is up for grabs.

The asking price for the historic Gibson-Todd House with its 113-foot turret, five bedrooms, stained glass windows, carriage house, and outdoor pool is $875,000.

The home at 515 South Samuel Street has had just two owners outside the original family of John T. Gibson, who built the stately brick home 32 years after Brown’s death.

In 1859, Gibson, then 34, was serving as a militia colonel in Charles Town and helped in Brown’s capture, arrest, and execution.

Long after Brown was a-moldering in his grave, Gibson and others who wanted the enslavement of African American men, women, and children to continue held onto their hatred for Brown, seeing him as a terrorist and a dangerous madman.

Gibson proudly chose to build his grand home on the land where Brown had drawn his last breath.

On Dec. 2, 1859, after his trial at the Jefferson County Courthouse in Charles Town, Brown was taken from his jail cell by wagon to a temporary scaffolding set up on what was then a 10-acre open field just outside of downtown Charles Town.

For Ralph Waldo Emerson, Henry David Thoreau, and many others, Brown was a martyr, even a saint. Both sides credit Brown’s raid in the fall of 1859 in nearby Harpers Ferry (then part of Virginia) as a central catalyst for the Civil War.

According to the Gibson-Todd House’s National Register of Historic Places application, Gibson came away from Brown’s execution in possession of the table upon which Brown’s death warrant had been signed and also the original Chatham Constitution, Brown’s plan for a new government had his bold raid succeeded in ending slavery in the U.S.

Gibson served as a colonel for the Confederacy in the Civil War and then became Charles Town’s mayor. His granddaughter Anne Gibson wed William Packette, a great-grandnephew of George Washington.

The Gibson-Todd House stayed in the family until Anne and William’s only offspring, Frances Packette-Todd, donated the home to the National Trust for Historic Preservation in 1982.

In 1987, Gene and JoAnn Perkins submitted a sealed bid to buy the property. They followed National Trust guidelines in completing a thorough remodeling, even adding the backyard pool.

The mansion went back on the market in 2011. Four years later, the current owners, David Wilson and Antonio Ramirez, bought the Gibson-Todd House. 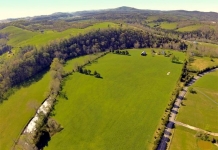 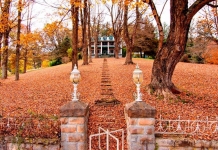 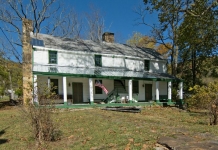 West Virginia landmark "Sinks of Gandy" still up for sale