Finding the place on a map is difficult. Finding it in the steep woodlands is even harder. But on a remote hillside at the southeast corner of Marshall County stands a weathered monument that establishes West Virginia's singular northern panhandle. Some say it's a place that at least every panhandle resident should see.

But its importance to the panhandle is the least of its charms. It's also the western end of the Mason-Dixon Line and the southern end of the lesser-known "Ellicott Line," which is the western boundary of Pennsylvania.

Andrew Ellicott, who was later a planner of Washington, D.C., walked across this very hill in 1779 while completing the work of his predecessors, Charles Mason and Jeremiah Dixon, who had stopped running the line westward three years before to avoid hostile tribes.

The short stone obelisk that marks the corner today is inscribed "1883" and is only 130 years old, so it's not the first monument. The first monument was likely raised around 1779 when Ellicott surveyed the line, which here leaves the east-west Mason Dixon line at a right angle and extends more than 150 miles north to Lake Erie.

Not an unimportant boundary, it ended years of argument between Virginia and Pennsylvania, which had long fought over westward settlements. The charters for both colonies expressed that they extended west without practical limits, but Virginia settlers enjoyed easier access to western Pennsylvania because of the number of passes that crossed the Applachian Mountains in Virginia.

Once Ellicot's line was complete, the two commonwealths — now no longer colonies — came to an agreement that satisfied both. Pennsylvania ceded its land beyond the line to Virginia. This meant that Virginia was given more control of the lower Ohio River while Pennsylvania retained the upper river and the strategic confluence of the Allegheny and Monongahela rivers — now at present-day Pittsburgh.

Only six years later, Virginia, too, decided to cede its land beyond the Ohio River to the new U.S. government, though it retained the slip of land now known as the panhandle. It became West Virginia's northern panhandle 78 years later during the Civil War when its counties voted to become a part of the new union-loyal state.

"And that's how we ended up with this strange-looking panhandle wedged between Ohio and Pennsylvania," says historian Travis Henline, project manager for the proposed Wheeling museum.

"Before the Revolutionary War, things were growing pretty heated in western Pennsylvania, but the line solved all that."

Jesse Mestrovic is now among those who think the monument could be developed as an educational resource somewhat like the Fairfax Stone. Mestrovic, the director of Parks & Recreation for the City of Wheeling, has long emphasized the low cost and high value of easily developing such sites in the northern panhandle.

He says he believes the monument is one of the most important in the state as well as in Marshall and Wetzel counties and adjacent Pennsylvania.

"West Virginia is one of the most uniquely shaped inland states in the Union, and every point that makes this state so special should be memorialized and shared," Mestrovic said.

"The cornerstone monument marks a very important time and place in our history."

"This monument should serve equal importance to the Fairfax Stone Historical State Park, which is now managed by Blackwater Falls State Park," he said.

Programs are available to benefit local governments and property owners who develop, protect, and maintain such sites. West Virginia communities such as Beckley have established trails to similar historic landmarks in cooperation with private landowners.

For now, the monument remains undeveloped on private land, and visitors should seek access from the property owner before visiting.

More information on the monument may be found at Waymarking.com.

When pioneers and other explorers first ventured into what would become West Virginia, they encountered artifacts of a much earlier age—carvings, burial mounds, and stone walls, the origins of which natives could not explain with certainty. Petroglyphs featuring human and animal figures were perhaps the most striking and inexplicable finds. Mounds and earthworks could be practically accounted for as defensive or monumental, but carvings? Read the full story here. 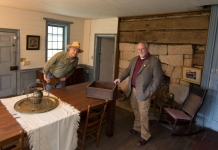