The total harvest was 1.5 percent below the 2020 deer harvest of 106,861 and was less than one percent below the five-year average of 105,718, according to Paul Johansen, chief of the Wildlife Resources Section of the West Virginia Division of Natural Resources.

“It is important to note that the antlerless harvest is the key component to any deer management strategy, as it controls the future deer population,” said Johansen.

WVDNR will hold in-person public meetings on March 14-15 for fall 2022 deer hunting regulations. The agency will solicit input on whether to increase, decrease or stabilize deer populations in each of the 51 counties where firearms deer hunting will be permitted for fall 2022. 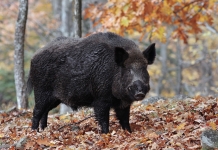 Dogs survive being trapped in West Virginia cavern with bear