This year the 10 a.m.-5 p.m. event presented by the Princeton Renaissance Project will feature performances by the Cirque-de-Vol Aerial Acrobatic Showcase as well as live music, dance performances, a live-art mashup, and other demonstrations.

Scores of vendors will also be joined by a zip line, the thrill game The Meltdown, a car show by A&R Productions, a quilt show by Mercer County Quilting Bees, and bounce houses courtesy of The Friends of Princeton Public Library.

"The buzz about the fair is certainly growing," McKinney said of the event and thanked city officials for their support and cooperation.

The Cirque-de-Vol Aerial Acrobatic Showcase, from Raleigh, N.C., will perform four sets of aerial acrobatics on trapeze, aerial silks and lyra in front of The Renaissance Theater.

Music will be performed live on two stages, at the Dick Copeland Town Square and The Fountain Stage, and will include folk and bluegrass by The Kind Thieves, blues and rock by Ball & Chain, alternative rock by The Magnum Opus, pop and rock by The One Voice Project, Americana by The Garrett Sisters, and blues by The Gin Mill.

The Renaissance Theater will open for tours, and the restaurateur set to re-open Jimmie’s Restaurant this fall will have his food truck, Oi Poloii, so guests may enjoy a preview of what's to come, she said.

A quilting exhibition in The Turnaround will feature The Mercer County Quilting Bees.

Vendors will sell items and services -- from kettle corn and snow cones to essential oils and massage to fine arts, crafts, and face painting.

Many downtown businesses will open, and guests are encouraged to explore and patronize them.

Sound production will be provided by LLyniuM entertainment, and the event will be emceed by Doc Atwell of Star-95.

Admission is free of charge, and a variety of food, retail and craft items will be available for purchase, McKinney said.

For more information, including a vendor application and guidelines, visit Celebrate Princeton or call 304-320-8833. 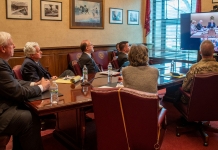