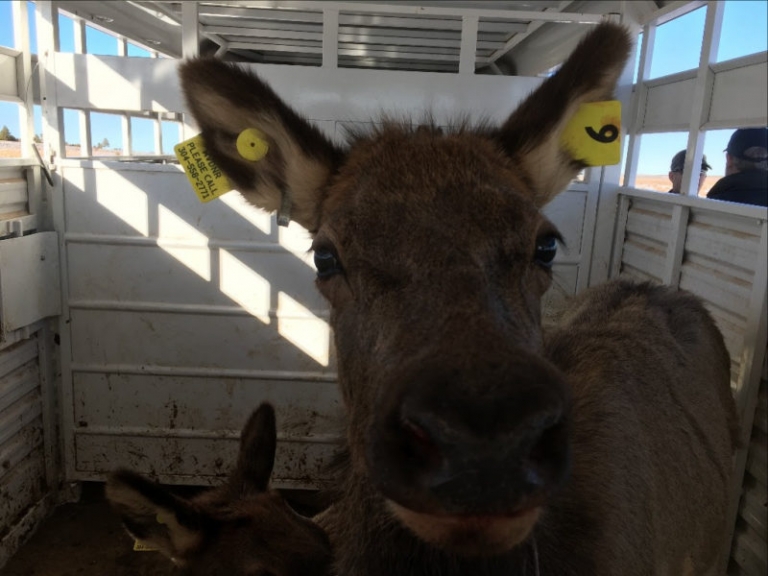 Fifty-one elk completed their journey from Arizona and were released into a holding facility in Logan County earlier this month, the W.Va. Division of Natural Resources announced today.

The elk, which are part of West Virginia’s elk restoration project, were captured in late January and held near Flagstaff, Arizona for disease testing. The elk arrived at the holding facility near Holden, West Virginia, late on March 4.

“It has been a wonderful experience working with the wildlife professionals in Arizona and all of the private supporters who are helping make West Virginia’s elk restoration project possible,” said division director Stephen McDaniel.

Staff from the division's Law Enforcement and Wildlife Resources department transported the elk through a partnership with EQT Corporation and Energy Transportation of Bridgeport.

David Alvarez, owner of Energy Transportation, and Greg Hoyer, of EQT, donated use of their company’s trucks and expenses from transporting the elk to West Virginia. The trip took 31 hours.

This group of elk will join more than three dozen elk previously brought in from Kentucky over the past two years.

The elk will be quarantined until they are released onto the Tomblin Wildlife Management Area in Logan County, as directed by the United States Department of Agriculture.

Each elk is equipped with a Global Positioning System (GPS) radio transmitter to monitor its movements. All GPS transmitters were purchased and donated by the Rocky Mountain Elk Foundation.

Read more about the WVDNR’s Elk Management Plan at www.wvdnr.gov/Publications/Draft_Elk_Plan.pdf.