Visitors are usually surprised when they walk through the door of Maggie's Pub in Fayetteville, West Virginia.

Only a stone's throw from the New River Gorge, they may expect an outdoorsy theme to match that of this outdoorsy town — the annual destination for thousands of hikers, bikers, paddlers, and rock climbers.

Instead, they're met with all the trappings of a small Irish pub, a watering hole that attracts many tourists as well as a local clientele apt to enjoy a refined beverage in good measure.

Founder Sharon Rynard says it will be hard to part with the personalities who frequent the Cheers-style pub, but investments elsewhere are occupying her attention.

"I wish I could tell you how much I enjoy running Maggie's," Rynard said, "but there's an opportunity here for someone new to build the pub into an even more spectacular space."

"Twenty thousand vehicles pass by on U.S. 19 every day — coming off or getting on the New River Gorge Bridge — and every whitewater-rafting tour bus that comes off the river turns in front of the building."

The owner of Inner Radiance Medical Spa in Morgantown, Rynard will maintain the Fayetteville property and other shops she operates there, including adjacent Studio B, a local arts store.

She pursued the idea of selling the two acres on which the pub is located but decided that developments in the local tourism industry made keeping the property a better choice.

"With the growth of the Summit Bechtel Reserve and increases in the outdoor-adventure industry, it made sense to retain and grow our assets here," she said.

Budget Travel magazine in 2006 named Fayetteville one of the "coolest" small towns in the U.S., chiefly as a result of its outdoor-recreation culture. Though with a population of fewer than 3,000 residents, it boasts two bike shops, two climbing outfitters, and five award-winning independent restaurants.

Maggie's is a turn-key investment, Rynard emphasized, ready to operate with all licenses and utilities in place and an established clientele. The business includes the pub, on-site parking, and private outdoor space with a deck, patio, gazebo, and a small game court for darts and cornhole.

"I think one important advantage for a new owner is the established clientele, who will offer year-round support and are super-welcoming to tourists — with whom we're swamped in the spring, summer, and fall," she said.

"I think it's an ideal investment for a first-time entrepreneur or a good addition to a business-investment network," she said.

"You'd also have front-row seats on Bridge Day, when more than 200,000 visitors walk past the property and out onto the bridge."

The pub is located within the town, though it lies outside its national historic district, and is the nearest available business location to the south end of the New River Gorge Bridge, less than a mile away.

Rynard said she hopes the character that has attracted so many visitors to the pub remains, but will leave it up to a new owner to make that choice.

"So far inquiries about the pub have entertained extending the present pub formula, but considering the location and steady increases in tourism and the development of resort-style neighborhoods nearby, who's to say what could happen?" Rynard said. 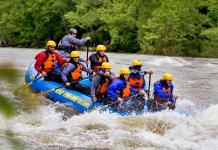 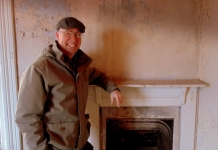 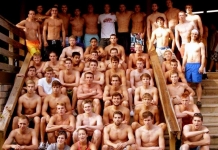