Hills Creek in Pocahontas County is more than just a pretty stream. Its waterfalls have won fame the world over, but there's more to the swift-falling creek than meets the eye, scientifically speaking.

Descending from the Allegheny Mountains in eastern West Virginia, it attracts thousands of tourists annually, and its triple falls are among the most visited scenic locales in the 921,000-acre Monongahela National Forest.

Within the 114-acre scenic area surrounding the Falls of Hills Creek, a three-quarter-mile trail provides visitors access to observation areas that overlook three consecutive waterfalls that drop 25, 45, and 63 feet over a 220-foot descent.

Observation areas for the first two are most easily accessible, and the first falls may be reached by a paved trail that leads 1,700 feet from a parking area upstream. The third falls, the second-highest waterfall in the state, requires that visitors descend a strenuous route that includes 382 stairs.

The round-trip walk takes an hour to complete, or longer if you plan to rest and contemplate along the way. In addition, the falls area is renowned for its spring wildflowers, of which more than 40 species have been surveyed.

Beyond its beauty, however, the creek's geology and hydrology draw naturalists to the natural area and the mountains and valleys beyond where at least four principals of stream development are demonstrated over its six-mile course.

At some point in recent geologic history, Hills Creek extended its headwater by eroding into the upper drainage of the Cherry River, capturing part of that river's flow. Hydrologists refer to this as stream piracy. Piracy is also imminent near Cass, where Leatherbark Run, a tributary of the Greenbrier River, will similarly capture the headwaters of the Shavers Fork.

Hills Creek drops precipitously down the Allegheny Front, an escarpment that extends some 400 miles along the high eastern edge of the Allegheny Plateau in Maryland, West Virginia, and Pennsylvania. Other streams along the front drop over similar ledges, though the falls on Hills Creek are stronger because the piracy upstream has infused the creek with far more water.

In its swift descent, the middle course of the creek cascades through alternating layers of softer and harder rock. Hard sandstones erode less quickly and create the upper edges of the three falls. Softer shales eroded into long drops without falls. The hard sandstones also form the high crest of the Allegheny Front, along which the highest summits in the state are located.

Most small streams drain into larger streams that drain into rivers. But Hills Creek disappears into a cavern. Hydrologists believe it sinks into the darkness beneath Droop Mountain and enters the Greenbrier River at some undiscovered point. Many streams in the region sink into the network of limestone caverns that extends 100 miles from Union to the sources of the Greenbrier River.

The Falls of Hills Creek Natural Area is accessible year-round, though icy conditions can make access difficult in winter. Even in summer, sunlight is limited in the steep, narrow ravine, and the stairs and trails to the falls can be slippery.

Photographers should be aware that direct sunlight reaches the waterfalls only briefly during mid-day and that in summer the waterfalls may diminish to only a trickle, though they are briefly rejuvenated after heavy rains

Visitors to the falls shouldn't miss the opportunity to visit the nearby Cranberry Glades Botanical Area, a drive of about six miles from the natural area or the Cranberry Mountain Visitor Center, open Thursdays through Mondays from 9 a.m. to 4:30 p.m. mid-April through mid-October.

The natural area is a drive of approximately an hour north of I-64 at Lewisburg, an hour east of the US-19 expressway at Summersville, and two hours south of the US-49 expressway at Elkins.

West Virginia trail leads through a garden of strange rocks

Wherever you turn in West Virginia, you’re bound to find remarkable rocks, and some may appear bizarrely unnatural. One garden of boulders in the mountains of Pocahontas County appears so unnatural that it’s hard to believe human hands haven’t carved their surfaces. 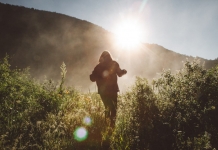 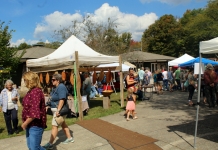 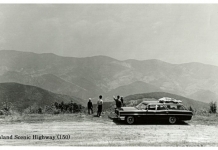