Thinking of buying forest in West Virginia? It makes good economic sense, according to one of the state's leading timberland brokers.

In one of the most wooded states in the U.S., buyers are investing in greater numbers for good reason, says Richard Grist, a certified state forester and the owner of Foxfire Realty, which specializes in rural real estate.

"I'm often asked about the forest as an investment," Grist says, "and I've come up with a few quantifiable incentives and a few that aren't so easy to enter into a ledger."

Forest is aesthetically important in West Virginia where tourism is concerned, and many resort areas depend on trees to sustain the landscape, but two quantifiable considerations come to the fore beyond aesthetic value—market value and return on investment.

"Forested land increases in value as the forest grows, regardless of what's happening in the financial markets, so forest land is a good long-term investment," Grist says.

"Timber also offers competitive returns, compared to other asset classes, and timber investments are flexible, so when prices are low, owners can withhold harvests until the market improves."

The market for timber is also likely to increase over the next few decades as the world's population grows, he says.

"With more than seven billion people in the world, on track to grow to nine billion by 2040, the demand for forest products is rapidly increasing," Grist says.

And forest investment is likely to attract positive regard, which can be important when it comes to leveraging green investors.

"Forest land is green, and it's considered an environmentally friendly and socially responsible investment," he says.

Of course, the forest also generates value that cannot be monetized—values that have proven highly important to many of Foxfire Realty's clients and customers.

"In the first place, there's clean air. Trees consume carbon dioxide and produce tons of oxygen. Then there's clean water," he says. "As rain falls, the forest floor absorbs the water and cleans it."

Biodiversity is also a primary consideration. "The forest is home to many plants, mosses, birds, reptiles, and furry animals," he says.

Aesthetics are also particularly important in West Virginia, especially for investors who have grown tired of living in urbanized areas. "A walk in the woods on a cool fall morning is quite the dividend."

And perhaps most importantly, for many investors who wish to sustain the investment for future generations, forests are renewable, and heirs may benefit for generations.

"The ownership of forest is a legacy," Grist says. "It's truly unlike any other investment available, and it exists as long as the land exists." 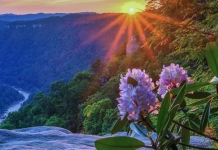