Two prominent species of rhododendron flower in West Virginia in spring and summer, but only one bears the official state flower. Pale pink or magenta, which blossom is the official blossom?

Flourishing from late May through July, no other flowering plant so vividly ushers in the transition between spring and summer in the Mountain State.

The beauty of the rhododendron is big, bright, and versatile. It can tolerate acidic soils and infertile conditions and grows as an evergreen or deciduous shrub from 13 to 40 feet high bearing white, pink, and purple blooms sometimes with orange or green spots.

Though the plant's name is derived from the Greek words for “rose tree,” the plant comes from the Ericaceae family, which also produces heath and heather. It is the largest genus in that family, which includes other woody shrubs found in West Virginia, namely azalea and mountain laurel.

Two kinds of rhododendron are native to West Virginia:

The Rhododendron in Appalachia

Rhododendron of both kinds prefers to live in the shady forest understory and thrives in deep, well-drained acidic soils that are high in organic content. The plant can, therefore, be found growing in masses on steep hillsides and along rocky cliff lines.

Under ideal natural conditions, it form ‘laurel hells,’ so-named by pioneers who found their acres of tangled branches difficult to traverse.

The plant's prominence in West Virginia led it to be celebrated in a few different ways.

In 1903, the blossom of the Rhododendron maximus was designated West Virginia's state flower at the suggestion of Governor George Wesley Atkinson and a vote from local school children.

In May, Beckley traditionally celebrates its Rhododendron Festival, which features a pageant, art shows, car shows, a dessert contest, and rhododendron-viewing events. Beckley's Founder's Day is usually scheduled during the festival.

Many parks in the mountainous regions of West Virginia are renowned for their rhododendron groves.

Grandview, near Beckley, is famous for its landscaped plantings of pink Catawba rhododendron, which blossoms in late May near the Cliffside Amphitheatre, home of the annual outdoor dramas "Hatfields & McCoys."

If you know of any other locations, facts, or events relating to the rhododendron in West Virginia, please contact our editorial department at the link at the bottom of this page and let us know. 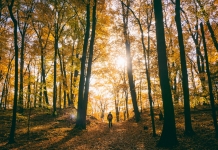