Officials at the W.Va. Division of Natural Resources today announced the winners of the state's 2021 Gold Rush Giveaway, the annual statewide promotion of fishing in the Mountain State.

According to DNR Director Stephen McDaniel, 36 participants managed to catch one of 100 golden rainbow trout that were stocked in state-managed ponds and streams.

“Gold Rush was a big success this year, and I want to congratulate the winners of these great prizes,” McDaniel said.

“Thank you to everyone who got out there and cast their lines for golden rainbow trout. We look forward to providing more exciting opportunities to enjoy our state’s natural resources.”

The Gold Rush event included two ways to win giveaway prizes. Numbered tags were placed on 100 stocked golden trout. Anglers who caught a trout with a numbered tag could complete the submission form online at GoldRushWV.com.

Anglers who didn’t reel in a tagged golden rainbow trout still had opportunities to enter a giveaway by signing up to receive travel tips and information from the division.

In total, there are 36 giveaway prizes. Winners will be contacted to confirm the information and their prizes will be delivered via mail or email. 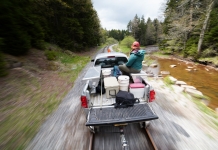