During the first years of the U.S. Civil War, marauding bands of guerillas roamed the hills in what's now central West Virginia. Most were loyal to the Confederacy, though they often acted in their own interests, raiding towns and farms at will.

To counter their activities, the Union established a fort on the old Weston-and-Gauley Turnpike near Bulltown on the Little Kanawha River. Soldiers raised a blockhouse and dug trenches from which they could defend the road, which served as the chief passage through the wilderness between the valleys of the Kanawha and Monongahela rivers.

In the summer of 1863, following the declaration of West Virginia statehood and a period of heightened rebel activity, the Union added more defenses and a barracks and ordered that 117 men and seven officers of the 6th and 11th West Virginia infantry occupy the fort.

Not to be outdone, the Confederacy took action and in October ordered William "Mudwall" Jackson to lead 700 men from his headquarters in the Greenbrier Valley at Lewisburg north to capture the garrison and proceed to a raid along the Ohio River.

A cousin of Thomas "Stonewall" Jackson, William reputedly shared his relative's red hair and blue eyes but not his strength of command.

On the night of October 12, he ordered his troops to divide and attack the Union fort from two sides. Though he was known as an eloquent speaker, his speeches lacked force, and that may have led to what afterward happened.

The attack was to begin at 4:30 a.m. at the sound of the first shot of a two-gun battery that accompanied the Confederates. However, Jackson's instructions were not followed.

About halfway up the hill toward the fort, one of Kessler's men shouted "Charge!"—awakening the garrison, which almost immediately opened heavy fire, driving Kessler's wing back down the hill. During Kessler's retreat, Thompson's wing reached its position on a hill across the river from the fort.

Jackson, who accompanied Thompson's force, sent a message to the Union garrison demanding their surrender.

Caption William Mattingly replied, "Come, and get us!" and the battle resumed.

The Confederate artillery was ineffective. Their small arms were of short range, though Captain Mattingly was shot in the thigh early in the fight and gave his charge to Captain James Simpson.

At about 3 p.m., Jackson sent a second demand of surrender, to which Simpson replied that he would surrender when hell froze over. And if he had to retreat, he would do so on the ice.

At about 4:30 p.m., Jackson order his troops to retreat to Salt Lick Bridge, though the next morning he was attacked by a detachment of the 4th West Virginia Calvary and withdrew.

The Confederates lost seven men and another six were seriously wounded. Their names were never recorded, though their bodies were buried near the battlefield and were later recovered and reinterred by Milton Butcher, who later owned and farmed the land on which the battlefield was located.

The Union suffered no fatalities. Captain Mattingly recovered, though he was lame for life.

Moses Cunningham, whose house still stands nearby in the Bulltown Historic District, ran out into the line of fire during the battle and yelled, "Hurrah for Jeff Davis!" and was slightly wounded.

The site of the Battle of Bulltown is maintained by the Army Corps of Engineers and one of several historic resources in the Bulltown Historic Area at Burnsville Lake off US-19 in Braxton County. The battlefield is a drive of about 15 minutes from I-77 exit at Flatwoods, West Virginia.

Did the first U.S. serial killer live in a quiet corner of W.Va.? 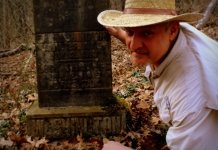