Rangers in the New River Gorge National Park and Preserve reported rescuing a deer from a deep ravine near the park's towering cliffs Friday, and worked with the West Virginia Department of Natural Resources in the effort.

"Rangers received a report of a white-tailed deer that appeared stranded in a steep creek ravine within the park," park officials posted on the park's Facebook page.

"After checking on it and giving it time to 'self' rescue, then trying to 'shoo' it up the creek, the deer still wouldn't move. It quickly became clear that the sheer cliffs, water, and falls provided too many barriers for escape.

"National Park Service rangers called the West Virginia Department of Natural Resources for assistance for this unique situation. Together, the agencies were able to come up with a plan and put it into action.

"For the safety of the deer and the rescuers, DNR officials tranquilized the deer then rangers were able to secure it in a harness and lift it out of the ravine.

"Rangers and DNR personnel assisted the groggy deer to a safe location where it could rest and recover."

The newest national park in the U.S. the park is part of one of the largest and most popular rock climbing areas in the nation and includes the New River Gorge.

The deer's entrapment occurred in a rocky area near the cliffs that line the rim of the gorge near the New River Gorge Bridge.

The white-tailed deer (Odocoileus virginianus), also known as Virginia deer, is a medium-sized deer native to North America. The deer's coat is reddish-brown in the spring and summer and turns to a grey-brown throughout the fall and winter. The deer can be recognized by the characteristic white underside of its tail. It raises its tail when it is alarmed to warn the predator that it has been detected. 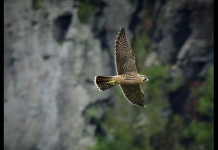 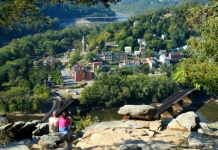 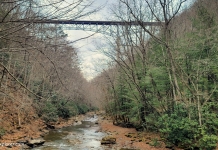