How did the grave of a soldier from the Shenandoah Valley wind up in one of the most remote and rugged mountain regions in southern West Virginia?

According to the legend, as it's come to be told, a band of marauding Shawnee burned Ralph Stewart's father at the stake, and so no one was surprised when at age 14 he left the Shenandoah to avenge his father and become an "Indian fighter."

He fought the Shawnee at age 25 at the Battle of Point Pleasant (1774), and four years later fought the English in battles at Hot Water, Ground Squirrel, Guilford Courthouse,  Charlottesville, and Yorktown. When Cornwallis surrendered, George Washington named Stewart one of the English commander's guards.

But then the American Revolution was won, and life on the frontier changed. The would-be hero found himself on the wrong side of the law. Stewart fled into the wilderness of what's now West Virginia.

"He was running from the law," explains descendent Shirley Stewart Burns, a historian and a songwriter regarded for her work in Appalachian music.

Once regarded as a hero, Stewart was charged with killing Indians. Before the Revolution, killings were often encouraged by colonial authorities, depending on the tribe, but after the war, the act could be punishable by incarceration.

Shirley Stewart Burns grew up a stone's throw from where Stewart settled. She cited historian Joel Hager as a reliable source for his history. Part of his Hager's account from Rootsweb.com follows:

"After peace with the Indians was made, Ralph and his brother James, as teenage boys, went on a prolonged hunting trip. Ralph, while alone in the camp, was set upon by a band of Indians, who hung around for some time amusing themselves by abusing and threatening him while selecting articles to carry away, eating and being offensive in pillaging and destroying the camp and supplies, then, upon leaving, they carried away the furs, pelts, and other articles they desired to take.

"The following night the two brothers followed the trail of the Indians, slipped upon their camp, and killed five of them. This act was, indeed, of great satisfaction and revenge for them but was a violation of the law after the declaration of peace had been signed by the government, and [this]made them liable for prosecution for murder."

As if the threat of incarceration weren't bad enough, the killings afterward opened Stewart to victimization by extortion. The culmination of troubles drove him into some of the most rugged lands what's now West Virginia, far from his Shenandoah homeland. Hager continues:

"Later, Ralph told of the incident to a hunting companion, who afterward became a rival for the affections of a young lady and, therefore, his enemy. Thus, the 'friend' swore-out a warrant for [the] murder and Ralph's arrest, whereupon the two brothers, Ralph and James Stuart, left the community and went to an uninhabited area of "Wilderness of the New River," where they set-up camp and stayed for a period of eighteen months, trapping and hunting and seeing only two other persons during that time."

The "Wilderness of the New River" was not literally that of the New River. Stewart actually escaped to the wilderness on the headwaters of the adjacent Guyandotte River, which was even more remote. Here the mountains rise more than 2,000 feet above the narrow valleys of the river and its branches. Only one other white man was then a resident of the upper valley: John Cooke served with Stewart at the Battle of Point Pleasant, though it is unclear whether Cooke helped arrange for Stewart's removal there.

Stewart first squatted, but he came to love the land, and even after being pardoned for the murders by the governor, he chose to live in the wilderness, and he became the progenitor of thousands of residents of the upper Guyandotte.

Stewart's headstone now stands silently on a wooded knoll at the mouth of Bee Branch near Crany, West Virginia, in one of the most remote valleys in the state. Visited sporadically by the curious, his grave and others, most marked only by fieldstones, have been tended by Donna Fraley and her husband, on whose beautiful property the cemetery is located.

In 2012, members of the Capt. Ralph Stewart Chapter of the Sons of the American Revolution, erected a marker along WV-85 north of Oceana, West Virginia, directing visitors to the grave and a second marker along Clear Fork Road.

A drive to the gravesite and along the country road leading to it makes for an ideal country drive. The Keatley Cemetery, in which the grave is located, is a drive of approximately six miles, or 15 minutes, north of Oceana, and 35 miles, or an hour, from Beckley, West Virginia. 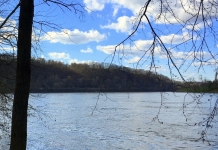