Instead of the traditional single-copy guide, the department is releasing a four-part guide that should prove collectible.

The upgrades include new landscaping, a new lobby, a new front desk area, new public restrooms, and a new outdoor pool with a splash pad. Lodge rooms have been renovated with new furnishings and wheelchair accessibility has been expanded.

Ruby haled the guide and map as one of the most important tools in the state's retinue for tourism. Request copies of the vacation guide.

"About 10 years ago, the vacation guide just looked like a phonebook," Ruby said. "The state wasn’t making an investment. And I’ll never forget, one of the first things the governor said was, ‘We’ve got to do better than this.’

“Two years ago we did a flipbook. Last year, we did the 50th anniversary of “Country Roads” special edition. And this year, we’re thrilled to become the first state in the country to release a collection of guides instead of just one.”

The four guides each highlight different aspects of what makes West Virginia one of the country’s premier vacation and travel destinations.

Each of the vacation guides features QR codes that expand on the published articles and provide online access to exclusive content and trip inspiration from hundreds of tourism businesses across the state.

As a part of this partnership, more than 100,000 West Virginia vacation guides will be included with subscriber copies of Southern Living and Real Simple magazines to encourage travel to the Mountain State.

Justice and Ruby also gave travelers a sneak peek of the all-new 2022 Highway Map, which features all of West Virginia’s state parks and forests, alongside important traveler information, must-see stops, and scenic country roads to travel throughout West Virginia.

“This is also something the Governor pushed us on,” Ruby said. “He wanted this to be a keepsake—a collector piece—and, along with our friends from the West Virginia Division of Highways, we came up with an absolutely stunning map.”

McMillion took to the podium during the event to celebrate major upgrades at Hawks Nest State Park.

“This facility had sat idly by for many, many years. It was very deserving of attention, and our governor answered,” McMillion said.

“What a showpiece we have here now. These restorations will serve West Virginians for years and years.”

The upgrades are part of $151 million of improvement projects completed or started at every state park and forest in West Virginia since Justice took office, McMillion said.

“Governor Justice’s commitment to our entire park system is giving us the ability to create great memories for people for generations to come, and that’s not limited to Hawks Nest. Right next door at Babcock State Park, we’ve invested $1.8 million in the cabins and infrastructure,” McMillion said.

“I also can’t thank the Department of Tourism enough for the work that they’re doing in connection with us at the DNR. The things that we’re all doing together are unbelievable.”

The governor thanked his team and all concerned with state tourism for their efforts, which have boosted the state's visibility as a travel destination.

“We’ve invested and, all of a sudden, you turn around and there’s money upon money coming our way," Justice said.

"All of a sudden, this state is now known far and wide as the diamond in the rough that everyone missed.” 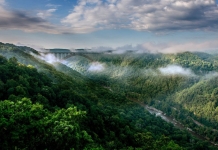 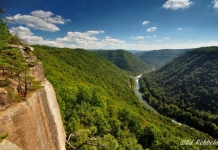 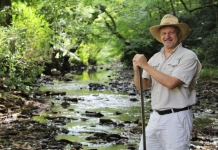