Perhaps there's no better time than fall to visit the Trans-Allegheny Lunatic Asylum: Dry leaves skittering along like skeletal fingers and the howl of autumnal winds add to the inherent eeriness of the edifice that overlooks the historic town of Weston, West Virginia. 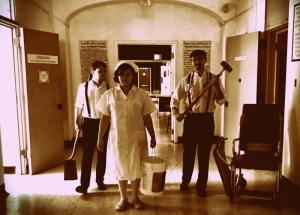 Halloween marks the height of the season of ghostly ghastliness here where thousands of tortured minds once wandered. Tourists have replaced them, and October is the busiest month of the year, according to Gwendolyn Urbanic, a guide and spokesman for the asylum—the complex of ominous buildings that served as a hospital for the mentally ill and criminally insane in West Virginia since the Civil War.

Traffic through the asylum has been higher than ever since last month when USA Today ranked it the No. 1 haunted attraction in the U.S., Urbanic said.

But, in fact, the chilling aspect of this towered building on the West Fork River is only part of a larger story that unfolds here. The tale of the asylum is less that of hauntings and the haunted and more that of the evolution of the care of the mentally ill in America. Though its main building—among the world's largest cut-stone buildings—may appear frightening to the modern eye, it was designed to provide residents a maximum of sunlight and fresh air—a far cry from the dim-lit dungeons to which the insane had formerly been sequestered.

Through November 18, 2018, specialized walk-in tours of the asylum are guided hourly Tuesday through Sunday from noon until 6 p.m., and paranormal tours are guided every two hours. Too large to heat reasonably in winter, the asylum will reopens when the weather warms at Easter-time. In the interim, builders are busy restoring the mammoth building and only private tours and special events are hosted.

Find out more about ghost tours and heritage tours.

Though a revolution facility its its day, the asylum became infamous in the 1950s as the Weston State Hospital when generally poor conditions existed and  more than 2,000 patients were crowded into its labyrinthine halls. Changes in the treatment of mental illness and the its physical deterioration led state officials to close the hospital in 1994, at which time they considered razing it entirely.

Thankfully clearer minds prevailed, and the building was auctioned to Joe Jordan, an asbestos-demolition contractor from Morgantown, West Virginia, who paid $1.5 million for the 242,000-square-foot building and its dependencies, all of which he has since helped stabilize. He and his wife has invested vast sums in restoration, and room by room, building by building, the long-neglected asylum is being brought back to life.

In its eleventh year, the asylum's legendary haunted house attraction, its Hospital of Horrors, runs through November 3, after which traffic begins to calm down again. If you're looking for an end-of-autumn outing, November at the asylum may be ideal, though be warned: the chills you seek can be accompanied by chilly weather, and you'll need to dress warmly.