During this Corona pandemic, silver linings aren’t that difficult to uncover. Take the air in our major cities: at no time in our industrial age has that air has been this clean. People talk about social distancing: we invented social distancing in West Virginia. With more than 25,000 square miles and fewer than 1.8 million residents, we all have our space.

And how fortunate we are in the Mountain State to have so many trails to hike! While hiking or biking responsibly, here are a few plants to watch for while you’re out on your next adventure.

Anyone who’s completed the first grade would have learned what a plant nerd our third president was, but few know that there’s a plant named in his honor. Yes, it’s true! Jeffersonia diphylla, aka “Twinleaf” is named in honor of Tommy Jefferson, and it just happens to be one of my favorite early spring plants.

I almost referred to it as “one of my favorite early spring ephemerals,” but that would only be half true because as fragile as the pure white, silver dollar-sized flowers are (they can be shattered by a drop of dew), this almost-shrub-like plant is persistent all the growing season long. This is especially true if it's planted in full shade and given extra water during dry spells. Making its home in the Berberidaceae or “Barberry” family (the same family as “May Apple,” “Blue Cohosh,” and, believe it or not, the invasive, horrible “Barberry”) Jeffersonia diphylla is one of our least-known and most desirable native plants.

Surprisingly, it does quite well in my somewhat low pH woodland gardens. I say surprisingly because in nature Jeffersonia chooses to grow in high pH limestone soils. This is yet another testament to the ability of so many plants to accept and adapt to a wide range of growing conditions for us gardeners.

As stated above, the flowers are very short-lived, but there is a consolation prize—a very cool seedhead. I’ve always described it as having a little sombrero, as it has a uniquely shaped structure with a “lid” that opens, exposing copious amounts of shiny brown seeds when they’re ripe.

Unlike a lot of other plants with explosive seed dispersal mechanisms, these seeds will patiently wait for you to collect them and create your own very special Twin Leaf colony. The common name for this treasure is “Twin Leaf,” and as you can see from the image, it’s a no-brainer to figure out where that comes from. And don’t wait too long to collect the seeds, as the plant depends on wind, wild animals, and hikers to help it spill the seeds out, and they may just beat you to them.

Typical height varies anywhere from 10 to 18 inches, and I’ve had single mature plants up to 24 inches in diameter. As with many of our native plants, a related species, Jeffersonia dubia occurs in Asia and is Jeffersonia diphyllas’ identical twin. It is indistinguishable, except for the flower color, which just happens to be blue rather than white.

I’ll refrain from suggesting companion plants as this super-easy-to-grow plant does fine on its own, and having a colony in your garden, large or small, is quite a staggering sight.

Another favorite in flower now that's easy to spot is our native “Stonecrop,” Sedum ternatum. This plant loves to carpet boulders and moist, mossy ground. In flower, it looks like a dusting of snow on the rocks. Being a succulent, it’s super easy to propagate and is a useful ground cover in every shade garden. An easy-to-spot ubiquitous, yet delightful native phenom is Iris cristata, our “Dwarf Crested Iris.” This low-growing, miniature iris is a delightful sight in bloom. It looks like someone spilled color all over the ground. In the garden, it makes a useful ground cover as it forms a mat of attractive sword-like foliage that’s impenetrable to weeds.

There’s so much to see this time of year that it can be a bit overwhelming and luckily due to the late spring we’re having, you’ve still plenty of time to get out there and experience it all. Go slow, and spend as much time looking up as you do looking down as every layer of nature has something to offer you, and don’t forget to be grateful that you ended up in this amazing part of the world!

Visit and shop Sunshine Farm & Gardens near Lewisburg, West Virginia, for more native plant information, and be sure to sign up for their newsletter. 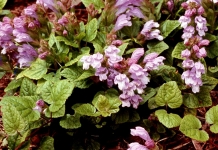 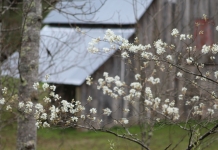 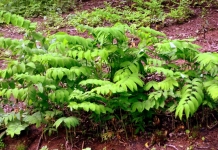