No matter which class of rapids paddlers are determined to take on, West Virginia is the place to find them. Here among the Alleghenies and Blue Ridge mountains, beginners and experts alike are bound to find the perfect run.

As can be expected, all of these clean-flowing mountain rivers boast different classes of rapids, some of which are for experts only. Most rapids are also seasonal, which adds an entirely different element to the experience of navigating them.

Whether kayakers and rafters wish to enjoy nature’s beauty with some swimming, rock jumping, and photo ops or put brains and brawn to the test, one or more of the top 10 whitewater rapid spots in West Virginia is where it’s at. From gentle streams to Class V+ rapids, the Mountain State truly is a paddler's paradise.

The reputation of the Upper Gauley River is known among rafters and kayakers around the world. This is not the place for beginner-introductions to whitewater rafting, especially not when more than sixty Class IV and Class V rapids drop more than 335 feet in elevation over fewer than 13 miles.

Some of the most exciting rapids on the river include the Iron Ring, the Insignificant Rapid, Lost Paddle, Pillow Rock, and Sweet’s Falls. Together they are known as the Big Five—and not just because there are five of them: they also happen to be Class V rapids.

The Upper Gauley is at its most challenging in late October after the water has been released upstream from the Summersville Dam. This time of the year is known as "Gauley Season" and is a favorite with water sports enthusiasts.

The Lower Gauley River may not share the white-knuckle reputation of the upper section, but it’s by no means boring. There are 70 rapids over a seven-mile stretch, and those rapids range between Class III and Class V.

Whereas the upper section of the river offers few opportunities to catch your breath and enjoy the scenery, there's a chance for that on the lower section. A highlight of the trip is being able to swim in some of the pools while soaking up the incredible scenery.

Although some of the rapids can be a challenge, the river is suitable for intermediate to experienced rafters. The most intense moments are offered by the three huge waves of the Mash Brothers rapids and the unforgiving hole of the Pure Screaming Hell rapid.

Less ferocious than the Gauley River, the Cheat River appeals to kayakers and rafters of varying levels of experience. The Cheat Narrows boasts multiple Class II and Class III rapids that make it a great choice for beginners with some experience as well as for intermediate rafters. Anyone who wants a little more oomph! should consider heading to Cheat Canyon, on the lower Cheat, where Class IV rapids await.

With Class I to Class III rapids, the Shenandoah River may not be up there with other West Virginian rivers better known for whitewater, but it certainly has something to offer everyone, especially if a group of kayakers or rafters includes people with varying levels of experience. It's also a drive of less than an hour from Washington, D.C.

The best spot of the river for whitewater is a 6.5-mile stretch near the confluence of the Shenandoah and Potomac rivers. Apart from the adventure of navigating the river, it offers chances to marvel at the beauty of the Blue Ridge Mountains and the Harpers Ferry National Historical Park.

For most of the year, the Lower New River offers mostly Class IV rapids separated by calm pools. Between April and June, however, it takes on a different character when rain and snowmelt increase its volume, ultimately leading to an eight-mile run of Class V rapids. A highlight of the trip is rafting or kayaking under the New River Gorge Bridge, which spans the gorge 876 feet above the river.

A tributary of the Gauley River, the Cranberry River is a fantastic choice for winter whitewater kayaking. Its upper, middle, and lower whitewater sections together form 30 miles of whitewater rapids between Class III and Class IV. As such, it's better suited to intermediate and experienced boaters. Grab your wetsuit! Year-round, its waters are chilly.

The Big Sandy Creek, near Morgantown, West Virginia, is a choice destination for intermediate and experienced kayakers and rafters. The Class III and Class IV rapids on the upper section of the creek attract paddlers looking for an adventure that isn’t too technical. The lower section, however, requires boaters to have their wits about them, as it offers blind drops, heart-pounding Class V waterfalls, and Class IV rapids known for their ledges.

Beginner and intermediate boaters are advised to stay away from the Blackwater River unless they are watching experienced kayakers who face its many challenges. The upper and lower whitewater sections offer Class V rapids. The upper section is infamous for sieves, boulder gardens, and intense drops that require skill and experience to successfully and safely navigate.

The Meadow River boasts rapids between Class III and Class V+, with the upper and middle whitewater sections that are perfect for kayakers. Rafting is possible when the water level is high enough. The lower section is where the Class V+ rapids can be found, and they are among the most challenging the Mountain State has to offer. One wrong move could be the last.

Merciless and mighty, Manns Creek is all about Class V+ whitewater suitable for expert kayakers only. The creek is a steep one in which tricky maneuvering is a near-constant requirement. An unbelievable number of blind drops have left many people questioning their sanity. That said, there are moments in which boaters can catch their breath and get their heart rate down to something resembling normal. This is thanks to great paddling sections at confluences with scenic Glade Creek and the epic New River.

Fill out one form and we'll disseminate your request automatically to all participating whitewater rafting guides and outfitters. We will neither share your e-mail with anyone else nor use this information for other purposes. 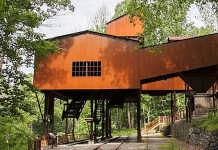