Of all the placenames associated with West Virginia, that of the Tug Fork of the Big Sandy River in southern West Virginia may be the subject of some of the most hotly contested debates.

Wandering through the state's southernmost mountains, the stream sources in the lee of Great Flat Top Mountain on Big Stone Ridge and descends gradually across McDowell and Mingo counties where it becomes the border between West Virginia and Kentucky.

Some 159 miles long, some call it the Tug River or the Tug Fork River. But any argument over whether it's a fork or a river itself is usually overshadowed by the term "tug" itself.

Some historians postulated that the stream was named for boaters who would tug laboriously on their oars and paddles to move boats upstream against rapids and shoals.

"They battled treacherous rapids that forced them to tug at their oars for days, only to eventually lose their fleet and most of their supplies to the raging river," historian Jim Comstock surmised.

But one historian more recently found the answer by reading into earlier histories, and the answer is found in the records of an early expedition into the valley of the Big Sandy.

Douglas McClure Wood, the author of “I Have Now Made a Path to Virginia: Outacite Ostenaco and the Cherokee-Virginia Alliance in the French and Indian War," says the correct explanation reveals far more about the history of the period.

"I'd heard any number of stories about how the river was named," Wood said, "but by going back into earlier documents from the colonial period I discovered a lot that later historians appear to have overlooked."

According to Wood, the fork was named for strips of rawhide consumed by hungry Virginian militia during the Big Sandy Expedition in the winter of 1756.

"These tugs were strips of rawhide—not tanned, not leather—cut into little narrow strips," Wood said.

The tugs were common, handy items to possess and served on the frontier as short, durable string. They could be used to stitch or repair moccasins or mark trees or tie small packages to belts.

However, the Big Sandy Expedition was no mere outing into the Appalachian forest. Organized by the Cherokee and the Virginians, it was inspired by the return of Mary Draper Ingles after her captivity among the Shawnees, a small but increasingly powerful native group in southern Ohio.

Ingles had been taken during a raid on her family's settlement on the New River in Virginia. She escaped and returned in 1755 and was able to provide the Virginians intelligence regarding the Shawnees, about whom the Cherokees likewise were concerned.

The Cherokee proposed an expedition into the Ohio Country that would threaten the Shawnee villages, and Virginia Governor Robert Dinwiddie proposed to send Andrew Lewis with a force of some 210 Virginians to join 130 Cherokee in the march.

The Cherokee proposed that the expedition across the mountains would take seven days. However, healthy Cherokee scouts could cover almost 50 miles in a day's march, and members of the Virginian militia were unable to approach those distances.

The Virginians were also unused to laboring on the small rations to which native scouts were accustomed, and during the expedition, somewhere in the vicinity of present-day Mingo County, a group of the Virginians mutinied. A large part of the Cherokees also left, disturbed by Virginian behavior.

"At one time 80 of the 130 Cherokees left as they were upset about seeing the Virginian officers beating men for insubordination," Wood said.

One group of Virginians who left Andrew Lewis wound up boiling and eating their tugs. There retreat probably occurred when the expedition had reached the mouth of Ben's Run near present-day Wharncliffe Station in Mingo County.

"A few scouts had probably gone farther downstream and then returned with good news of finding signs of game that they could eat. But by then the men were starving, some horses had died, and rations were almost nil."

"It helped the Virginians understand more about native warfare," he said, "and it helped build strong friendships among the officer corps of the Virginians and the Cherokees, which led to the success of the British and Colonial forces over the French in 1757 and 1758." 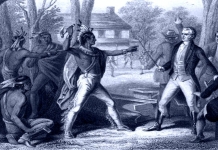 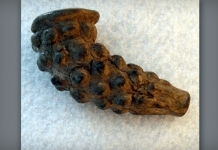 Prehistoric W.Va. was NOT an "uninhabited hunting ground"